Dave grew up in Aspen, Colorado. The Durrance family arrived in 1947 when Dave was two. 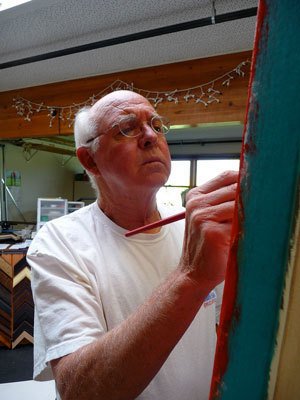 While he is more widely known for his various roles in skiing as a racer, coach, and retailer, he began studying art in high school. He earned a BFA in painting at the University of Denver in 1968. That summer he had a one-man show at the Wooden Horse Gallery in Carbondale, CO. Growing up in Aspen in the 1950’s and ’60s he couldn’t help being influenced by the work of Herbert Bayer, and through him the work of other Bauhaus artists.

He continued painting when he could, rarely showing for the next forty years. He has recently returned to painting full time and has participated in numerous group shows throughout the valley for the last ten years. Dave has been included in shows at the Red Brick Art Center, the Aspen Chapel Gallery, LivAspenArt Gallery, the Aspen Art Museum, Carbondale Arts, Toklat Gallery in Basalt, Anderson Ranch Art Center in Snowmass Village, CO, and Colorado Mountain College. He has had several solo shows at Bonfire in Carbondale, CO, The Anderson Ranch Art Center, Snowmass Village, CO, and River Valley Ranch, Carbondale, CO. Dave works at his studio in the Third Street Center in Carbondale, and has studied at Anderson Ranch, CMC and CCAH (now known as Carbondale Arts).

I am an abstract color painter frequently combining and contrasting organic and abstract elements. I use color to create illusions of shape and space. Maps and landscape elements are often woven into compositions. I start with a sketch of the design of the piece and then execute that design at full size on the canvas.

I was influenced early on by the work of Herbert Bayer whose art and design was prevalent in Aspen in the 1950’s and 60’s. Other influences include Klee, Kandinsky, Albers, Stella, Johns, Manuel Felguerez, and Lynda Lowe.